White Mountain Regional Medical Center's patients have access to advanced technology and a healthcare plan
specifically designed for their successful treatment and recovery. From admission until
discharge and beyond, we focus on exceptional care, close to home.

The Digital Disaster Response System for White Mountain Regional Medical Center in Springerville, Arizona. This site is for web-enabled communications during emergency events. During an actual incident the disaster action plan or important directives will appear on this page. 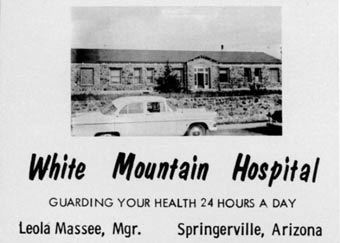 
The first hospital building was a one-story rock building located on land donated by the Town of Springerville. It was a fifteen-bed hospital facility. Between 1959 and 1965 the citizens of southern Apache County, together with those in Catron County, New Mexico, launched an effort to raise funds for the construction of a more modern facility. This culminated in 1965 with the construction of the current hospital facility at a cost of $531,000. Half of this amount was purely donation and was matched by Federal Hill-Burton funds. At this time the White Mountain Communities Hospital bylaws were amended so that the corporation conducted business through a Board of Directors, each member representing a community within the service area. The Board entered a contractual relationship with Good Samaritan Hospital (later known as Samaritan Health System) in 1971 for management of the hospital facility. In 1982, the Board completed a $1.5 million expansion of the hospital. Samaritan opened a long-term care facility adjoining the hospital in 1987.

In early 1995, Samaritan elected to end its relationship with the hospital facility, citing operating losses as the reason. This action created a crisis that seemed certain to lead to the closure of the hospital and the termination of many vital medical services. The citizens within the service area responded by mounting as "SOS" (Save Our Services) campaign. They held telethons, raffles, bake sales, and other activities to provide funds just to keep the hospital open on a month-to-month basis. Apache County and the Townships contributed, and local businesses collected donations in countertop glass jars. At the same time, a petition was circulated offering the creation of a special tax district to support medical services in the area. Action from the Arizona State Legislature allowed the proposition to be placed on a ballot. 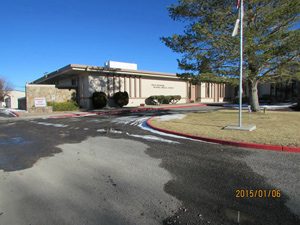 As it currently operates, White Mountain Regional Medical Center is a 21 bed Critical Access Hospital. In addition to inpatient services, the facility offers:

Laboratory Services, which include Blood Bank, Chemistry and Hematology

Rehabilitation Services, which include inpatient and outpatient Physical Therapy, and Chiropractic

Food Services, which include a consulting Registered Dietitian

White Mountain Regional Medical Center is currently a Level 4 Trauma Center. In 2014, the hospital also received Pediatric Emergency Certification. There are several physicians/providers located in the area that routinely use our facility in some capacity. In addition, there are many physicians with sub-specialties that visit the area providing obstetrics and gynecology, ophthalmology, orthopedic, podiatry, and general surgery close to home, through the White Mountain Specialty Clinic.